Progressivism at City and State Levels

Reformers responded to the inordinate control that robber barons and corporations had on the US economy by enacting new protections for workers and new reforms. On the state level, regulatory boards were created to oversee business, reduce monopolies that restricted competition, and ensure the protection of employees. Laws were passed which established a minimum wage, established standard working day hours, and limited child labor. Many businesses, predictably, opposed laws restricting their control over the market and their workers. Some of these cases were tried in the Supreme Court.
Muller vs Oregon
Click on the link below and read and complete the interactive reform activity (3 pages) to learn about voting reforms.
Voting Reforms

Teddy Roosevelt rose to power after the assassination of William McKinley. At almost 43, he was the youngest president to be inaugurated, and he brought a vitality to the office that bespoke of his love of the outdoors and hunting. Roosevelt inherited a nation where political corruption was endemic and large trusts controlled the economic landscape. He believed that it was the president's duty to take decisive action to protect the interests of the people, and he saw the office of the president as a kind of "bully pulpit" allowing him to influence the media and direct legislation.
Full playlist

While Roosevelt's views on race may seem particularly repugnant to modern sensibilities, he was, in fact, representative of many white people of his era. He believed that American whites, particularly those of his own station, were superior to all others. By the standards of his day, he would probably be considered a moderate in issues related to race.

The Monroe Doctrine of 1823 established the U.S. position on foreign interference in the Western Hemisphere. Initially, the doctrine presented a sort of laissez faire policy in which the U.S. agreed not to meddle in the affairs of existing European colonies in Latin America so long as the parent countries did not attempt to colonize new areas.
Roosevelt reinterpreted and expanded the Monroe Doctrine.
Roosevelt saw the U.S. government as responsible for intervening in world affairs in order to protect our interests.
The White Man's Burden
The poem "The White Man's Burden" by Rudyard Kipling expresses the European viewpoint that legitimized the oppression of countries in Asia, Africa and Latin America. Simply put, the people in these nations were viewed as heathens who needed to be "rescued" from their inherent degradation. According to the poem, despite the irrational resistance of the native people, it was the white man's burden to lift the savages from their wretchedness by colonizing and controlling them. While Roosevelt did not think much of Kipling's writing ability, he agreed with the poem's sentiments.
TR's Big Stick diplomacy is perhaps most closely associated with the building of the Panama Canal.

Roosevelt's rough diggers, from Puck, heading to work on the Panama Canal. The president's aggression in Panama divided US opinion. Click to read more

European nations in the 1800s exerted their power around the world by creating colonies, ostensibly, to increase trade. Their assumption of moral and cultural superiority led to a paternalistic attitude which further contributed to the control and degradation of the native people.
The United States became increasingly concerned about the influx of European powers into the Western Hemisphere. Europe established the model for becoming a world power which necessitated expansion though imperialism. 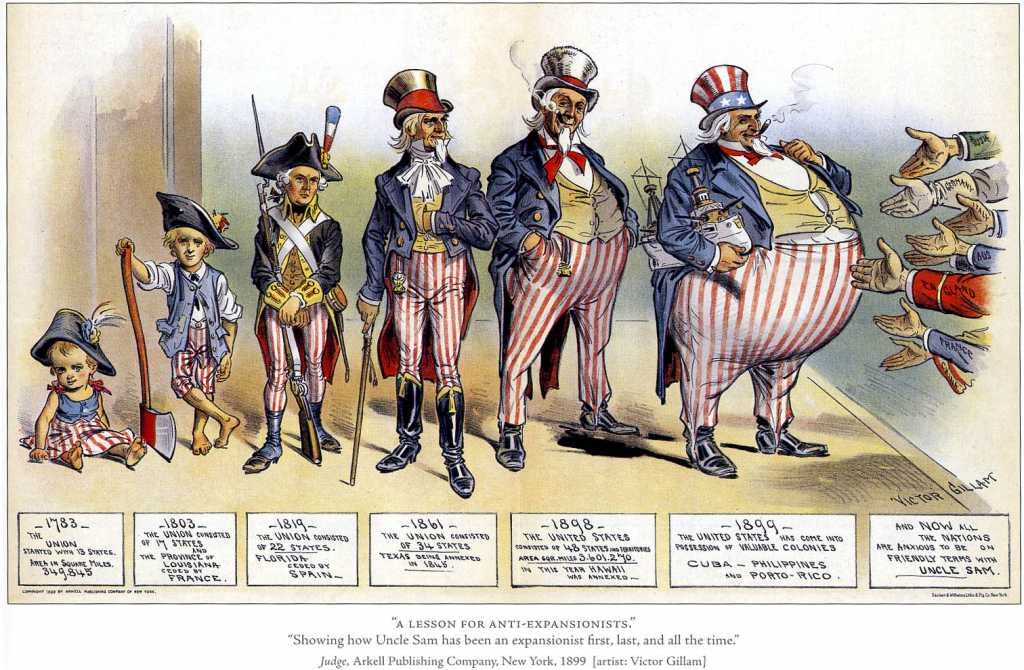 Taft had served as the Secretary of War under Roosevelt, and when Roosevelt ended his second term, he strongly suggested that Taft be nominated as the Republican candidate for president. Roosevelt expected Taft to follow his path, continue progressive reforms, and expand the influence of the office of the president. Instead, Taft diverged from Roosevelt's agenda, and this angered Roosevelt to such an extent that he decided to run against him as a third party candidate at the end of Taft's term.

Taft's domestic policies diverged greatly from TR's and nowhere was this more evident than with the passage of the immensely unpopular Payne-Aldrich Tariff of 1909.

1909 cartoon criticizing to Taft's continuation of his predecessor's "Roosevelt policy," pointing to "Taft policy" on wall, and telling Taft, "You're big enough to have your own policies - and they are good enough for the American people."
In spite of the fact that Roosevelt was known as the trust busting president, Taft's administration actually initiated far more anti-trust legislation than TR's. Taft believed that the best way to improve American society was to seek out judicial constraints.

The final nail in the coffin of the Taft/Roosevelt friendship involved Taft's mishandling of the Ballinger-Pinchot affair.

The election of 1912 was a circus for the Republicans. TR, feeling personally affronted by Taft, decided to compete with Taft for the Republican nomination. Despite the fact that Roosevelt seemed to have more party support than Taft, it was Taft who was chosen to be the Republican candidate for president. Roosevelt and his supporters formed a third party, "The Progressive Party," known also by the nickname, "The Bull Moose Party." In addition to battling each other, Roosevelt and Taft were pitted against the Democratic candidate, Woodrow Wilson, and the Socialist Candidate, Eugene Debs. Wilson won in a landslide.

The conflict between Roosevelt and Taft and the presence of both men on the ballot served to split the Republican vote. The consequence of this was that Woodrow Wilson was elected the 28th president of the United States. Wilson, called Tommy by his friends,  was an ambitious, scholarly man with a deep interest in history, a subject he much preferred over his studies in jurisprudence. Wilson returned to his alma mater, Princeton, serving first as a professor and then as the president of the university. During his time as president, Wilson transformed the the college by creating a system similar to the one currently in place at most universities with departments, unbiased research, and a unified curriculum. Despite his accomplishments, Wilson's legacy is tarnished by his open racism and support of eugenics.